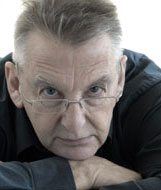 Alan Bright
Graduating from the Medway College of Art with an LSIA, Alan began his design career in London in the late 1960’s, working with Peter Hatch Associates, a leading design practice. Having specialised in typography, Alan moved on to Avon Cosmetics, and subsequently designed the Brighton™ family of typefaces in 1979 because he wanted to ‘give something back’ to the industry which he loved. Originally conceived as a text face, Brighton became more popular as a display face and has been used on a wide variety of items from packaging to books and films.

In 1980 he left London and moved to Gloucestershire to start his own design practice, and by1985 had developed a client base that included MAN trucks and Volkswagen Commercial Vehicles - an account which is still with the company after 23 years! He has also undertaken work for companies such as Rolls-Royce Aerospace, Mitsubishi, Plessey and Peugeot cars. In 2000 the company moved into its own purpose-built facility containing the largest drive-in photographic facility in the southwest of England.

In 2005, Alan re-branded the company to become Twentyfive Creative LLP. Although the change partially reflected the recognition of 25 years trading, it was primarily to promote the depth of experience that Alan and his team had acquired in holistic branding.

Alan has now co-written a book on holistic brand entitled ‘Step away from the crayons’. The book presents a practical approach on how to build holistic brand for smaller companies in any business-to-business market sector. The book will be published by Matador Business Publications and utilises Brighton as the text font.

Further information on holistic branding is also available through the company website www.twentyfive.co.uk.
The Know How section offers detailed background knowledge to deal with all enquiries about the use of fonts.