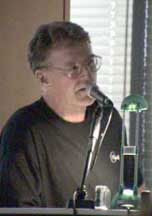 John Benson has designed and carved headstones, civic and memorial tablets, and architectural lettering since he graduated from the Rhode Island School of Design as a sculpture major. In 1964, he was commissioned to design and carve the inscriptions for the Kennedy Memorial at Arlington Cemetery. John Benson created inscriptions for famous buildings such as the Prudential Center in Boston, the National Gallery of Art, the Dallas Museum of Art, and the Armand Hammer Museum of Art in Los Angeles. He has drawn various photo-typefaces for architectural applications and a titling typeface, called Aardvark™, for The Font Bureau in Boston.
Benson has won numerous awards for his calligraphy, lettering, and inscriptional work, which has appeared in major exhibits in Europe and America, and he has lectured widely on calligraphy and monumental lettering.