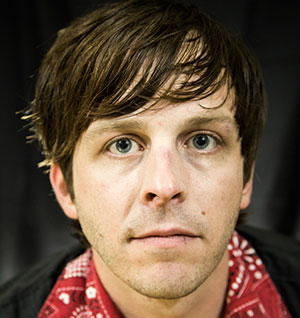 Is type design what you are mainly doing? What is your profession aside from type design?
Type design is my profession and art is my other discipline. Graphic design and illustration fall somewhere in between, but I’m not currently active in those practices.

What inspired you to design Posterama?
It began as a logotype for my old band, Duchamp, in 2007. The band was both an homage and an experiment, not the ordinary garage band. We were challenging ourselves in an improvised art, with a mix of rock and jazz musicians making conceptual music. Those were fun times. I really enjoyed leading the band, so I invested a lot into it. Regarding the type, I tried to capture the spirit of Marcel Duchamp’s times in the typeface, as well as the Sci-Fi Futurist themes of our group’s music.

Are you influenced by other typefaces by the design of your typeface?
Yes. It was influenced by early 20th century sans serif type – the type that came with modern art and the movements in the first half of the 1900s. So Futura® and Gill Sans® and other geometric types come to mind. However, under a digital microscope … these types have a different feel than when you find them in ephemera of those bygone times. I never really get what I’m looking for by using the digital fonts. What is missing, you ask? The softening effect of printing and mechanical reproduction, which evolved quite a bit over 100 years. Poster lettering also inspired many of the alternate letterforms that are part of it. I love our visual history, and the 20th century was something special.

What was the greatest challenge you faced while creating your typeface?
Well, years later the concept was expanded with weights and a ton of alternate forms. Some of the alternate shapes were part of the original concept with Duchamp, but it was taken up a notch with Steve Matteson’s advice. So we ended up with a lot of different looks for this geometric model. The challenge was then to find a way to package the family and offer the best possible experience for the user. That’s how the 20th century themes were born, which is really a fun aspect of the product for me. It is like a mini history lesson told through type and a timeline.

Are there aspects of the design that you think should be highlighted, or you particularly want the graphic design community to know about your typeface?
Well, I notice that a lot of the design community uses fonts straight out of the box, so I’ve tried to make sound decisions based on that. However, with many display face experiments, you’re not getting as much out of the typefaces unless you really dig in and explore their features. Posterama is easier to use because of its packaging – change the family to a different year, and you have a different look that occupies the same space.
But there is more under the surface … each of these subfamilies has their own unique Stylistic Sets, which adds to the variety that’s already established by the themes. I don’t think anything needs to be highlighted in Posterama – the “years” and styles say everything they need to. You can see and hear the story just by looking at the font name. Think of it like a game or a puzzle with clues; did you pay attention in history or art class? Because this should all be familiar. Even if you are not a history buff or an artist, chances are you’ve experienced type like this in the world and you know what its about.

What are the unique details from which you think they distinguish your typeface?
Hmm… its got kind of a “standard” look to it, but the details are pleasant and it stands up. We’ve found a way for that platform to work for a variety of voices. I think of typefaces as individuals, with specific voices and so on. Posterama is like a skilled voice actor – a simple person like you and me at a glance, but with the ability to transform into something else seemlessly.

What was the reason for you to give the typeface its name and what is the meaning?
It’s a suggestive name with a retro spin. Posters and poster lettering are in its bloodstream, but its also like a vending machine for familiar geometric letterforms. Its got all of the flavors, you just have to put your coin in and dial the code for whatever is tickling your tastebuds. Hence, Posterama.

1. This applies to all-caps setting in most designs, and definitely Posterama. Design tip: the capitals LOVE extra space, or positive tracking. +40 is a sweet spot, but you can go as far as +200 or +300 and it really gives the text and letterforms a light sophistication. I’m less keen on tightening the space, but you can do that too.

2. Since there are 9 flavors of Posterama, I’d like to point out that the “1927” series is the most neutral variety in the family. “Posterama Text”, which includes lowercase and additional language support, is based on “Posterama 1927”.

3. Mix & Match. All of these designs are slightly different, even if there is a common thread and some letters don’t change. For short bits of text, I would encourage experimenting with the forms and weights. The Stylistic Sets are complimentary to each specific series in the family. Tip: try mixing letterforms from the “1901” and “1933” series, to create a hybrid Arts & Crafts / Art Deco feel. There is a lot of overlap in these genres, and no real rules. “1901” has a high waistline, while “1933” has a low waistline – these can be combined to create rhythm and contrast within a word. It is something that we’ve seen in classic poster lettering and Deco motifs, so these two series are very compatible.
The Know How section offers detailed background knowledge to deal with all enquiries about the use of fonts.