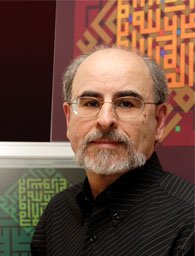 ﻿Mamoun Sakkal
Dr. Mamoun Sakkal is founder and principal of Sakkal Design established in Bothell, Washington in 1984. Providing graphic design and communication solutions to major national and international corporations, Sakkal Design has received several awards for calligraphy, graphics, and type design including three awards of excellence from the Type Directors Club of New York, one from IRCICA in Istanbul, and First Prize in Letter Arts Review Magazine International Competition in 2005. In 2001 Dr. Sakkal hired his daughter Aida Sakkal as a full time programmer and shifted the firm’s focus to Arabic typography and calligraphy. His work is widely published and he was recently commissioned to design the corporate Arabic typefaces for Burj Dubai (now Burj Khalifa) and Armani Hotel in Dubai, and Awan Newspaper in Kuwait. Sakkal Design has been the Arabic typography specialist for Microsoft Corporation since 2001, and several of his Arabic fonts are now commonly used as Windows system fonts. Other clients include Adobe, Bitstream, Linotype, National Geographic, and TripleInk among others.
Dr. Sakkal studied art at the Plastic Arts Center in Aleppo and has degrees in architecture form the University of Aleppo and the University of Washington in Seattle, and a Ph.D. degree in Islamic art history from the University of Washington on the use of Square Kufic calligraphy in modern art and design. He has lectured on Islamic art, Arabic calligraphy, and Arabic typography at universities and conferences in the United States, England, Dubai, Syria, and Uzbekistan. www.sakkal.com.

On the following page, you will find an extensive interview with Mamoun Sakkal concerning his font creation Shilia.
The Know How section offers detailed background knowledge to deal with all enquiries about the use of fonts.