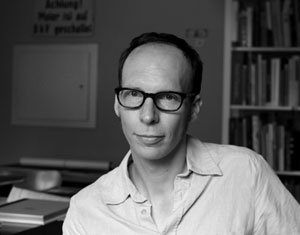 What first awakened your interest in typographic design?
It’s difficult to say, but I can remember that I used the squared pages in my school exercise books to construct letters. I think that was the starting point for me. My first computer, an Atari ST, had a wonderful little program that took up much of my time. There was a text editor with which you could draw bitmap letters in very low resolutions. From then on, I only ever printed anything using my own – probably poorly legible – typefaces. But I was absolutely enraptured by the idea that I was able to create something that I had previously thought would be beyond my capabilities. Many users simply take typefaces for granted. And I suspect the whole thing has something to do with an outlook that I have had throughout my life – I never want to take anything for granted and always prefer to do it all myself. For example, one of my ambitions is to design my own set of cutlery and I would also very much like to design a chair.

How many typefaces have you designed until now?
Again, that’s a question I find difficult to answer. It depends on what you mean by typeface; a single font or a font family. In terms of font families, I have created getting on for 40. But in the early days I experimented a lot and published my experiments as free fonts. It was really very easy under those conditions to produce a wide range of typefaces. Over the past few years, I have been concentrating on producing text fonts, some of which contain a large number of different styles. Off the top of my head, I think I’ve designed seven of these.

Is type design what you are mainly doing? What is your profession aside from type design?
Although there are times when I get custom commissions and type design is temporarily my main occupation, I more frequently work as a typographer and graphic designer. Together with Kathrin Roussel, I run the Sichtvermerk bureau where we develop corporate designs, books and other mainly printed media projects.

What originals and models etc. influenced you during the design process?
I recall that I was a little disappointed when the first square sans typefaces appeared on the market and I had the impression that I might have developed my concept too late. Even so, I of course decided to take a closer look at typefaces such as Apex and Sanuk. I was at the time particularly impressed by the work of Xavier Duprée (designer of typefaces such as Sanuk, Vista and Absara) and I sent several of my draft designs to him. His comments were very helpful but at the same time made clear to me the extent to which personal preference influences the way we work.

What was the greatest challenge you faced while creating your typeface?
The most difficult thing was being able to finish the job. When I first showed the typeface to Linotype I thought it was more or less complete. However, it turned out that more intermediate weights were required and the typeface needed to have a more consistent feel across the various weights. The face had previously developed more or less organically – one weight simply following the next. After my meeting with Linotype, I knew I had to reinterpolate all the weights between Light and Extrabold and completely revise the italic styles to correspond. Luckily for me, for a while I was helped by Steven Wulf – a very talented and promising type designer who was doing a traineeship with me at the time. Despite this, there was still an awful lot of work involved in creating the many different weights, the genuine cursives, the small caps and the alternative uppercase cursive letters.

There was a period of almost eight years between the creation of your first drafts and the publication of the typeface. Quite a long time …
Fortunately, typography is a field in which things don’t move all too rapidly, although of course there are fashions and fads. The most positive aspect for me is that I think I have matured along with the typeface. Thanks to the longer breaks in the work process, I was repeatedly able to cast a fresh and critical eye over my work. This meant that the risk of generating things in a spontaneous outburst – the results of which one can easily come to regret later – was considerably reduced.

For what applications would you recommend your typeface? (texts, newspapers, display, headlines, posters, books, screen font, corporate design, etc.)
As I see it, this typeface is most suitable for use in corporate design. It has such a distinctive character that it can readily be used to express a corporate identity. On the other hand, the typeface is flexible enough to be used in all media – I find it looks particularly good on display screens. With its large range of weights, the typeface can be used on its own – in other words, it is not necessary to combine it with other typeface to make it interesting, one can just use various different weights. As simplicity is always the be-all and end-all in corporate design, it makes sense to use an extensive typeface such as Yalta Sans. In addition, I believe it conveys values that are important to many businesses: a human approach and an affinity with technology.

Since 2007, you have been teaching typography and font design at various institutes of higher education. How has this influenced your work?
Teaching has considerably broadened my theoretical horizon. I have had to read up on things that I previously knew little about to ensure that I provide my students with accurate information. Of course, every book contains cross-references to other books so that my library in the office has continued to grow rapidly. But reading all these books has done me good. Because I am an autodidact, I was always worried in the past that there were things that I simply did not know. Now I am much more relaxed and reasonably confident.

In your biography, you reveal that you are ‘German Swiss’ by nationality but you don’t have a Swiss accent.
Ah – you’ve caught me out there. I was actually born and brought up in Germany and despite visiting the country on numerous occasions, I am only really Swiss on paper. But I am such a fan of Swiss graphic design that I would like to associate myself a little with it. For me, the best of Swiss design combines all the merits of Dutch design – the playful and experimental – and the merits of German design, such as meticulousness and diligence. With this in mind, I think the reason I make reference to my origin is to demonstrate that both levity and contemplation are important to me.
The Know How section offers detailed background knowledge to deal with all enquiries about the use of fonts.