A practical approach towards Corporate Type:
The Suntory case

Linotype has been instrumental in supporting the Japanese corporate group Suntory, the country’s leading beverage manufacturer, in the development of its new corporate identity.

As of January 2005, Suntory now presents itself with an original new logo and a new corporate type, which has been adapted by Linotype to meet Suntory’s needs both in Latin and Japanese variants. Type designers rarely have the opportunity to accompany such a comprehensive redesign of a company’s Corporate Identity. The expert advisory team for the selection and reworking process was headed by Linotype’s Type Director Akira Kobayashi together with British designer Matthew Carter.

The continuation of a vision

The core business at Suntory is primarily focused on soft drinks and spirituous beverages. For eighty years, the company has been distilling excellent whiskeys with international renown. The field of soft drinks became a similar success factor when the company acquired the Pepsi Cola bottling rights for Japan. In addition, Suntory is also involved in the floristry and gastronomy sectors. Among other achievements, Suntory developed the first rose to blossom with blue petals. Beyond business, the company founder Shinjiro Torii considerably shaped the development of Suntory with his vision of reinvesting company profits for the good of society. In connection with its core business in the beverages industry, for instance, Suntory places special emphasis on the protection of nature and environmental awareness. Among other efforts, Suntory has also opened an international art museum in Osaka as well as the Suntory Hall in Tokyo, a concert hall now known throughout the world for its unique acoustics, especially for classical music. To better suit its identity as a dynamic company with a unique commitment to society and the environment, Suntory decided to rework its public appearance. In the middle of 2003, the company began looking for international support. Masao Takaoka, a renowned type specialist, recommended Akira Kobayashi, Type Director at Linotype GmbH. After initial discussions with Suntory, Akira Kobayashi brought Matthew Carter on board as well. In his career, Matthew Carter has produced such highlights as Microsoft’s Verdana and Georgia. When he turned 60 in 1997, Matthew Carter was honored with the Type Directors Club medal for his lifelong contributions to typography. 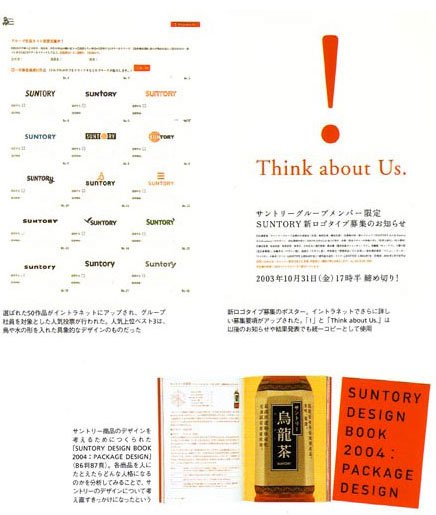 For European or North American standards, Suntory chose an unusual approach to their redesign and search for a new logo. All company employees were asked to formulate in words what they found to be specifically “Suntoryesque”. The second step in their participation was the creation of 1,018 drafts of possible logos. This comprehensive and time-consuming approach also reflected a core value of the Suntory corporate philosophy, expressed in their motto “festina lente” – which may be roughly translated as “act fast slowly”. This saying was penned by the Japanese writer Ken Kaiko and accurately characterizes the Suntory balance between acting fast in a business sense while also preserving traditional company values. When Akira Kobayashi and Matthew Carter arrived at Suntory in the beginning of December 2003, they were greeted with 1,018 logo suggestions. Their challenge was to reduce this mass of ideas to a short selection of viable logo candidates. A series of criteria had to be taken into consideration in the selection. On the one hand, the logo had to be legible not only in large formats but also on small labels on bottles or cans. The logo was supposed to be immediately recognizable and innovative, yet not make concessions to short-lived trends or eccentricities, which might make the logo seem outdated in a few years. The logo also had to reflect the many facets of the company’s activities – from high grade spirits, soft drinks and mixed beverages, to restaurants and flowers. This collaboration with Suntory turned out to be a truly enriching experience for the expert advisory team. Matthew Carter found the work on the development of the logo was analogous with one of the company’s core activities – the distillation of raw materials. In narrowing down the many suggestions, the team came closer and closer to the company’s essence with every refining step which was a challenging and also rewarding process for the team. 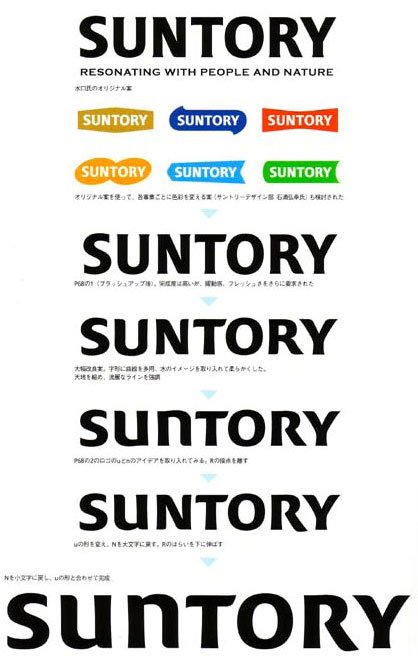 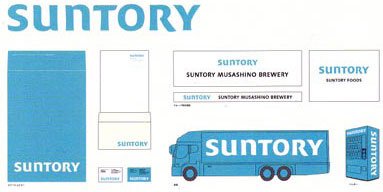 Destilling of a new image

Shortly after the start of the project, Akira Kobayashi and the design team were able to reduce their selection of logos to only six. After presenting their interim suggestions to the Suntory management, a further design process began which culminated with the presentation of the final logo in the middle of February 2004. Without drawing on existing font designs, the typography of the logo expresses a unique personality which is also timeless in its clarity and legibility. The new logo also served as a important guide in the selection of the new corporate typefaces. Further criteria included the key values of “fluidity, nature and humanism”. Akira Kobayashi suggested a series of typefaces which could be adapted by Linotype specifically for Suntory. The six month’s refining of the font families came to a close in the fall of 2004 with the unveiling of Suntory Syntax and Suntory Sabon with a total of 12 Latin fonts as well as the Japanese families Suntory Gothic and Suntory Mincho. The overall redesign was officially introduced to the public in January 2005. Reflected in its original and refreshing appearance, the redesign marks a bridge between Suntory’s past successes and its progressive visions for the future.

Linotype’s Syntax and its Japanese equivalent

Linotype’s Sabon Next and its Japanese equivalent

Following is a brief description of the new typefaces as seen by Kaoru Kasai, Art Director and Vice President of the agency Sun-Ad, chief provider of Suntory’s TV and print advertising: “In the tradition of its founder, Suntory has always been interested in continuously liberalizing its corporate activities. The question arose as to which typefaces would be best suited to represent Suntory, a multi-layered company with interests in a wide variety of fields. At the same time, the corporate type should also convey a sense of youthfulness and sophistication. In the end, the selection was narrowed down to 2 fonts from Syntax® and Sabon® Next, which in a long process were adapted to work well together with Japanese characters, for instance, whenever multi-lingual texts are needed.” 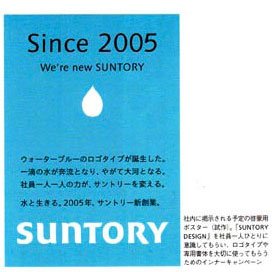 A poster for in-house campaign
Contact us – we are
happy to advise you!
[email protected] OEM contact form