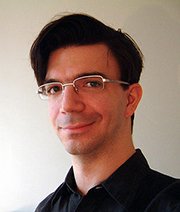 Tobias Frere-Jones
After receiving his BFA in 1992 from Rhode Island School of Design, Tobias Frere-Jones joined Font Bureau, Inc. in Boston. During his seven years as Senior Designer, he created a number of the typefaces that are Font Bureau’s best known, including Interstate and Poynter Oldstyle & Gothic. He joined the faculty of the Yale School of Art in 1996, where he continues to teach typeface design on the graduate level. In 1999, he left Font Bureau to return to New York, where he began work with Jonathan Hoefler. Since working together, the two have collaborated on projects for The Wall Street Journal, Martha Stewart Living, Nike, Pentagram, GQ, Esquire, The New Times, Business 2.0, and The New York Times Magazine.
He has designed over five hundred typefaces for retail publication, custom clients, and experimental research. His clients have included The Boston Globe, The New York Times, The Cooper-Hewitt Museum, The Whitney Museum, The American Institute of Graphic Arts Journal, and Neville Brody. He has lectured at Rhode Island School of Design, Yale School of Art, Pratt Institute, Royal College of Art, and Universidad de las Americas. His work has been featured in How, ID, Page, and Print, and is included in the permanent collection of the Victoria & Albert Museum, London. In 2006, Frere-Jones became the first American to receive the Gerrit Noordzij Prize, presented by the Royal Academy of The Hague in honor of his unique contributions to type design, typography, and type education.
The Know How section offers detailed background knowledge to deal with all enquiries about the use of fonts.