1550: opens a printing workshop in Antwerp. The affiliated type foundry uses punches and matrices made by Claude Garamond and Robert Granjon, among others. Jacob Sabon works in Plantin´s foundry.
1567: Plantin publishes a book containing typefaces produced by his printing works, entitled “Index characterum”.
1568–72: produces a polyglot bible in several volumes, with Armenian, Hebrew, Greek and Latin translations printed in columns parallel to the original text.
1570: the Spanish king and the Holy See grant him the privilege of printing all liturgical books for Spain and the (Spanish) Netherlands. Plantin is made royal printer to King Philip II of Spain.
1589: Plantin´s son-in-law and principal heir Jan Moretus takes over the business which is run by the family until 1871, after which it becomes the Plantin Moretus Museum. Plantin was responsible for over 2,000 publications in Antwerp and Leiden. He was thus the most profilic printer and publisher of his day. 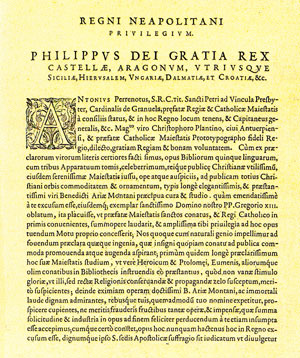 Page (1572)
The Know How section offers detailed background knowledge to deal with all enquiries about the use of fonts.