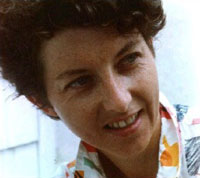 Jean Evans
Trained as an art historian at Queens College, Charlotte, North Carolina, Jean Evans has designed type digitally at Bitstream and Interleaf, and works today as a freelance type designer and artist bookmaker in Cambridge, Massachusetts. She specializes in letterforms – calligraphic and typographic – and is associated with Corey McPherson Nash in Watertown, Massachusetts. In spare moments she brainstorms new ideas with kindergarteners where she spreads the joy of letters as sculpture and animated drawings. Elli, her first original typeface, was based on her personal italic hand and was commissioned in 1989 by the Houghton Library at Harvard University to honor Eleanor Garvey at the time of her retirement as Curator of Printing & Graphic Arts. The typeface Dizzy grew out of an artist book commission about the famed trumpeter Dizzy Gillespie, a longtime friend from the designer’s home state of South Carolina. Starting with a partial sampling of Dizzy’s handwriting, Evans filled out the character set, tyring to keep the gnarled and marvelously peculiar attributes that had initially attracted her to those forms. Dizzy brings a wide range of emotions to a typeface. Rats, like Dizzy, was another great “find”, according to Evans. While researching manuscripts from the second century A.D., especially Rustics and Roman cursive miniscules, Evans concluded that illustrator Scott Nash’s quill-written letterforms captured what she was after – a vague reference to times past, yet an expression that was contemporary with a wry sense of humor.
The Know How section offers detailed background knowledge to deal with all enquiries about the use of fonts.