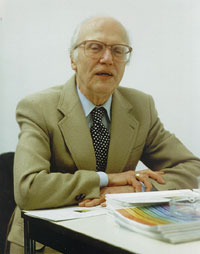 Wilke was initially interested in painting, drawing, and typeface design, but his tendency toward typefaces gradually overshadowed the others. Inflation eventually made further study impossible for him. He showed his modest collection of typefaces to Wilhelm H. Deffke, who studied them closely and said, "Look at how you press into the paper..." He had apparently noticed the determination behind Wilke’s efforts. Wilke worked for and with him for two years, and after a year-long assistent position in the studio of Prof. O.H.W. Hadanks, returned for another three years.

Wilke font sample
In the middle of the 1920s, Wilke designed a script typeface for the headlines of a series of Cadillac advertisements which attracted the attention of the Wilhelm Woellmers typeface foundry. He added the final characters and the Wilke™-Kursiv was born, now known as Ambassador from Photo Lettering Inc. A little later he worked on the design of Muratti advertisements. The script typeface used for the top quality Ariston cigarette, "Ariston, Germany’s most distinguished, recognized best cigarette", was produced in three weights, and it seemed to make sense to name the typeface Ariston® BQ. Before 1939, Wilke also finished the brush typeface Caprice®, and broad-tipped pen typeface Diskus™. After 1945 came the brush typeface Palette® , the script typeface Piccadilly, the broad-tipped pen typeface Berolina™, the sans serif Essentia, the decorative typefaces Moira and Halftone and finally Konzept, written with a felt-tipped pen. The Wilke™ was designed in 1988 and is a transitional serif typeface available in six weights, including small caps for the regular weight.

New Berolina font sample
The Know How section offers detailed background knowledge to deal with all enquiries about the use of fonts.