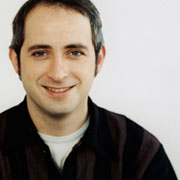 Gunter Schwarzmaier
German designer Gunter Schwarzmaier created the font Linotype Leggodt™ in 1997. The font is based on the forms of the first fonts intended for multimedia, for example, OCR of Adrian Frutiger. These fonts could not yet be seamlessly displayed on a screen and look ’pixel-y’. Because of this extremely technical look, such forms have appeared in the typography trend of the 1990s.
The Know How section offers detailed background knowledge to deal with all enquiries about the use of fonts.