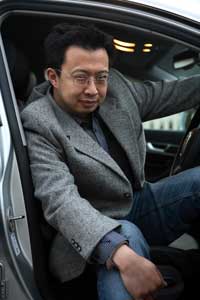 Background on my projects

“I started designing type in the 1980s. My interest in type began in my first year of school in New Zealand, at age five. On the wall was the alphabet in Paul Renner’s Futura®. I still remember the lowercase j not having a traditional terminal, and how that was different to what I had been taught. In 1979 I remember The Lettering Book became available through a school book club, though it was too expensive by my reckoning, at . It was probably just as well: if I did ask my parents for it, and they bought it, I probably wouldn’t have created my own styles as a boy. It was those hand-lettering styles that formed my earliest releases in the late 1980s.

I began doing custom type in the mid-1990s and while I was releasing retail type, I spent the last few years concentrating on private accounts. My business had diversified a great deal this century and due to some bad staffing decisions I made elsewhere, my focus was shifted to solving the problems there. Now with all that behind me, I began working on retail type projects again.

The release that probably gave me a bit more press than I had gained for type over the years was JY Alia, earlier in 2009. I began thinking about doing a text aldine as early as 1993, and decided to work on JY Aetna first. That was a Bembo® revival and I went back to the source material – Griffo’s original types – to do that. They were originally cut for around 14 pt, which meant that if I were to follow Griffo’s lead, the resulting type family could never be used properly in a text setting. I am still quite happy with the result, as I use JY Aetna alongside Monotype Bembo or Bitstream’s Aldine 401, which in turn was based loosely on the Linotype cut.

I finally began work on JY Alia in 2008, the idea being to create a text typeface for Lucire, a fashion magazine we publish in the same group. We eventually settled on Monotype Dante® there, which I have always loved since my days in law school (it is used for the All England Law Reports). The reason was that JY Alia was slightly too heavy and formal for a fashion magazine, but I could see it working particularly well for the financial sector and news magazines. Of course, I hope people find other uses for it, as it’s very adaptable.

JY Alia was also intended to be a text complement to JY Aetna, but as Monotype had already created a lovely text version of its Bembo face, called Bembo Book®, there was no point duplicating that. Instead, I did JY Alia was I saw fit: using a Griffo inspiration but mixing in ideas from Robert Granjon’s Plantin® (another typeface I have loved for many years, since it was used in an Autocar redesign in the 1980s).

You can see it’s not a straight Griffo style in the roman W, g and t, while in the italic, the p and y borrow more from Granjon. Mostly, however, this was the aldine typeface I wanted to do in the 1990s.

Creating JY Alia for OpenType was enjoyable. We’ve started with four cuts but I guarantee there’ll be more. I already use one of the new versions internally and see a lot of potential for it. We’ll definitely tell Linotype customers as soon as we’re ready to show the next Alia subfamily.

Private accounts aside, this was the first JY&A Fonts family designed specifically for OpenType. JY Aetna and JY Integrity were both developed for QuickDraw GX which, as we know, didn’t take off the way we had hoped. Only Linotype made any concerted effort to convert core libraries to the new format. Unsurprisingly it did not take much extra effort to create JY Aetna for OpenType, but with JY Alia I was able to build in more, from the extended Latin character sets, the small caps and 5,100 kerning pairs in the roman. I try not to use classes for kerning and do as many the old-fashioned way as possible.

The following year will see a lot more developments in our range, and you’ll have to watch this space. Next up for release is JY Fiduci, which I originally did in 2003, again for Lucire. It’s essentially “our Caslon”, but for display sizes. We were using it for titles and callouts in the magazine.

Our best sellers
I didn’t expect to get into display fonts when I began, but JY Comic Pro, by Antonio González de Santiago, is a strong seller. In terms of text types, JY Aetna, JY Integrity and Yan Series 333 all seem to have their moments, alternating for top spot. I think I am associated with JY Aetna the most, which is ironical as I didn’t design it. I have always credited Griffo for the roman and Tagliente for the italic. But, as was once uttered in our business, the old guys stole all the best ideas. If you look at Linotype’s own best-seller list, the traditional types still sell better than the novel ones.

Also ironical was how well the JY Décennie family sold over the years. This was a 1990s type family that didn’t come from any direct inspiration, but from working with an Australian newspaper who had some specific requirements for its body type. While it was not adopted and entered my range soon after, it proved to sell well between 1997 and 2000, which at one point led me to believe that the less inspired the design, the better it would sell!

It is too early to tell how JY Alia has sold but we have had a lot of enquiries for it; interestingly, we still get enquiries about JY Aetna, and we were also asked if we would do an extra weight of JY Koliba, by Jure Stojan.

My favourites
Maybe I should be like Sergio Pininfarina, the car designer, who says, ‘My favourite design is my next one.’ But perhaps the true test is what I use the most of. For many years, the standard sans serif internally was JY Décennie Express. I think this is a lovely, space-saving humanist sans, well hinted, with very readable oldstyle numerals. I built in ink traps for the smaller sizes.

Internally, we developed a typeface family called Lucire, for Lucire, of course, in the spirit of Helvetica®. This became used extensively within our group for much the same reasons as Helvetica is used: it expresses a sense of modernity and familiarity, which is quite good for what our businesses were trying to convey.

Among the serif types, JY Pinnacle was the default for most of our work for years, but lately JY Alia has been our standard. My email browser and word processor default to it. So JY Alia is probably my favourite for now – Zuzana Licko is right when she says we read best what we read most, and JY Alia has a sense of familiarity as well as originality – but that can always change in a few years.”

Koliba JY sample (pdf file, 24 kb)
To download this PDF, please click on the image.
The Know How section offers detailed background knowledge to deal with all enquiries about the use of fonts.