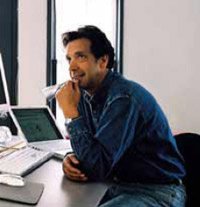 David Berlow
David Berlow’s career in type has been a continual mix of the traditional and cutting edge. He entered the world of type design in 1978 as a letter designer for the Mergenthaler Linotype type foundry one of the oldest, still operating type foundries. After working for Linotype for four years, he was then one of the first employees of the newly formed digital type supplier, Bitstream, Inc. Berlow left Bitstream in 1989, to found his own company, The Font Bureau, with Roger Black.

Berlow is a person that has made technology work for him. Armed with computer hardware, state-of-the-art software, modems, ISDN lines, and e-mail, he has been able to move his business from downtown Boston to Martha’s Vineyard, an island off the coast of
The Know How section offers detailed background knowledge to deal with all enquiries about the use of fonts.