It isn’t often that Linotype releases a new serif typeface family intended for setting long passages of text. Many designers enjoy making more display-oriented typefaces. Others prefer the clean, optimistic modernism of sans serifs. When we produce a new serif family, it is a reason to celebrate! Let’s open a bottle of champagne for Alex Rütten’s Ginkgo™. Don’t mix this typeface up with the older display font name Ginko, though! That is quite a different design indeed. 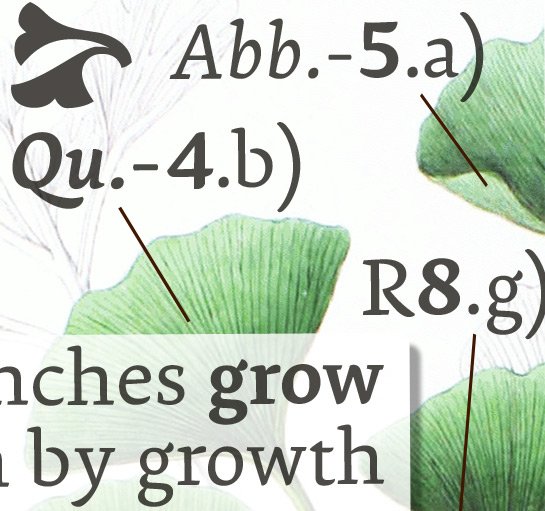 Ginkgo is a small family of four fonts: Regular, Italic, Bold, and Bold Italic. But strength lies within them. Alex Rütten has delivered a serious, contemporary text face. Its letters remain clear in small sizes, thanks to the open counters inside them. In general, Ginkgo’s width is also generously wide. The type should sing when setting book or magazine text.
Use Ginkgo a little larger, say in a headline, and a number of details rise to the surface. Alex Rütten’s decisions regarding the modeling of the serifs, crossbars, and terminals are a delight to behold.
Keen observers will note a Dutch feeling in Ginkgo’s design. One of the centers of contemporary typeface design, the Netherlands and designers educated there have helped define our understanding of what contemporary typefaces look and feel like. Ginkgo’s Dutch spirit is part of what makes it unique.
The four fonts in this family have been produced according to Linotype’s high standards. Ginkgo’s OpenType Pro character set supports at least 33 Western, Central, and Eastern European languages.
Features such as small caps, oldstyle figures, ligatures, or ornaments may be accessed in any OpenType-savvy application, e.g., Quark XPress 7 or Adobe InDesign.

Ginkgo was awarded a Certificate of Excellence in Type Design at the Type Directors Club of New York TDC2 competition in 2009.
Try out this new typeface family today, and let us know what you think!
Let the outstanding quality of this typeface convince you.
Download a printable sample of Ginkgo as a PDF.
Categories