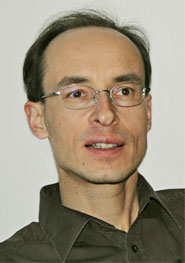 Georg John
The German graphic designer Georg John (Kugler) works mainly in the field of image/typeface/layout. He studied at the University of Fine Arts (Hochschule für Bildende Künste) in Braunschweig where he discovered his passion for typography. His diploma dissertation took the form of an experimental prognosis of the future of typefaces, based on a theoretical analysis of the development of Latin graphic characters.

The main focus of his typographic work to date has been the design of pictographic fonts, in which words become pictures and pictures words. And typefaces based on organic, rather than linear structures. His productions are not intended to be alternatives to normal typography, but merely represent supplementary and contrasting options.

In 2008, he developed his own Johnstemp™ typeface from the standard Tagesstempel™ font. This is available in four different bold variants and a mixed version. The four bold variants incorporate many diverse glyphs, making it possible to develop a script that appears, as realistically as possible, to have been ‘stamped’. There is also the “Johnstemp-Mix” which unites typefaces of various forms and bold font sizes and can be rapidly combined to provide a dynamic typeface. There are also many differing glyphs provided to ensure that there is no repetition.

In the case of his font Cutter™, the letters have the appearance of silhouette-like, cut-out characters. They are particularly suitable for use as initial letters and have a particularly striking effect when coloured.
The Know How section offers detailed background knowledge to deal with all enquiries about the use of fonts.