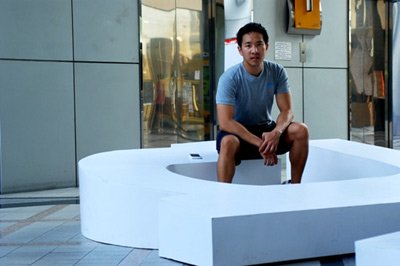 
How did you felt in love for type design?
I can’t really pin point how did it happen. The experiences are spotty. Answer to this question could be vary. One of the events that I can recall is when Thai banks started using automated teller machine in the early ’80s. They all came out with futuristic lettering for ATM. The ads are all over. It was quite exciting to see different approach on that initial 3 letters. It lead me to lettering and gradually type design when I came across with font and font menu in my first Macintosh LC II.

How many typefaces have you developed until now?
Many of them that I have done over years. Honestly, I do not keep track of how many of them. It is simply because looking back from this point most of them are the work that I’m not so proud of. I have done so many useless stuff in the early days. I also think that it is perfectly normal when you look back at your work and you say to yourself “Why didn’t I do this instead of that or I would have done it differently”. Now that we do custom typeface for clients (mostly in Thailand). We work as a team rather than solo like in the early days. I could be involved in two or more projects at the same time so I lost track of record.

Is type design what you are mainly doing? What is your profession aside from type design?
I used to do graphic design for living and type design as a hobby. Back in the ’90s working full time as type designer in Thailand is an unheard of. Many things have changed since then. Now we are doing full type design service. Graphic design is something that I can’t peel it off but I do less of them these day. I wish I have more time to do enough of graphic design. I still get a kick out of it. Beside running my design firm, I also write about design for number of magazines in Thailand and teach graphic design and typography at Bangkok University and Chulalongkorn University.

It is an honor to work on an all time favorite like Helvetica ...
What inspired you to design this typeface?
I grew up in the ’80s when dry transfer letterset by Mecanorma was very popular. I came across a set of Helvetica® Bold like in Thai by Manop Srisomporn. Mecanorma renamed the face to Manoptica for Thai market sale pitch. It was very impressive work and answered to the popularity Helvetica in Thailand. The idea was a bit ahead of time for legibility. Manoptica was treated as a display face rather than something versatile like its Latin counterpart. Not until it was converted to ASCII font format later on. It also inspired many Thai typefaces in the ’90s and opened up Thai letters into a new realm. In 2009, my studio revised and added more weight to that particular face and renamed it to Manop Mai (New Manop) based on the input from Manop himself. When Linotype invited me to explore the possibility of developing Thai glyphs for Helvetica World. It is hard to say no to the project. It is an honor to work on an all time favorite like Helvetica.

Are you influenced by other typefaces by the design of your typeface?
I always have a thing with OCR style typefaces. I have learnt a lot from that direction in the yesteryears. I would not deny that the influence of experimental with Fontographer typeface era still somehow in me. Now my interests are vary and it depends on many other factors. If you need a few names here, they would be Frutiger®, Helvetica, Meta®, Univers® and DIN. They inspired everything out there that inspired you so how can you not be inspired by them.

What was the greatest challenge you faced while creating your typeface?
As I get older, the fancy stuffs are not so interesting anymore. Decorative features are something that I would like to avoid. I have done my great shear of awkward display typeface in the late ’90s that I do not want to repeat. I found making it practical but yet distinctive and somehow not too traditional are very challenging. Just like other type designers you get a kick out of type design every time when you can come up with a very simple solution right of your nose. Also when you found a new way to do letter “I”. It is very fascinating to see others come up with new solution in type design. It is very hard to do while you already have million of them out there.