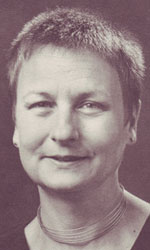 Freda Sack
Freda Sack was born in London in 1951. She completed her diploma in Graphic Design and Typography at the Maidstone College of Art. She began to work at Letraset International in 1971 and learned the basics of font design under the direction of Bob Newman. In 1978, she was appointed Senior Type Designer at Hardy Williams Design in London and moved to Typographic Systems International in 1980. Sack began working as a freelance designer in 1983. Her clients included British Airways, Air UK and Vauxhall. In 1990, she and David Quay founded The Foundry, a company for the development, production and distribution of fonts. She also taught at a number of universities in the UK.
The Know How section offers detailed background knowledge to deal with all enquiries about the use of fonts.