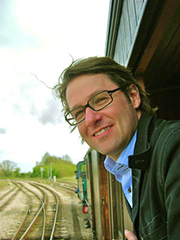 Jean François Porchez
After training as a graphic designer, during which he focused on type design, Jean François Porchez (1964) worked as a type direcor at Dragon Rouge. By 1994, he had created the new typeface for Le Monde newspapers. Today he designs cusom typefaces for companies such as ratp (public transport in Paris), Peugeot, Cosa Crocieres, France Télécom, as well as disributing internationally his retail typefaces via his www.typofonderie.com website.

He was a jury member of the 3rd Linotype Type Design Contest, and is the Vice President of ATypI. He teaches type design at ensad in Paris and regularly contributes to conferences and international publications. He published Lettres Françaises, a book (in French & English) that shows all contemporary French, digital typefaces.

In late 2001 he was the President of a jury set up by the Minisère de l’Éducation Nationale to selec the new handwriting model and sysem for France.

He was awarded the Prix Charles Peignot in 1998. Angie (1990) & Apolline (1993) were prize-winning entries in the Morisawa typeface competition. Cosa received a Certificate of Excellence in Type Design at the tdc2 2000. Ambroise, Anisette, Anisette Petite, Charente, Le Monde Journal, & Le Monde Courrier were all prizewinning entries in the Bukva:raz international competition (2001).

In 2002 he designed Sabon® Next, a redesign of Sabon.
The Know How section offers detailed background knowledge to deal with all enquiries about the use of fonts.