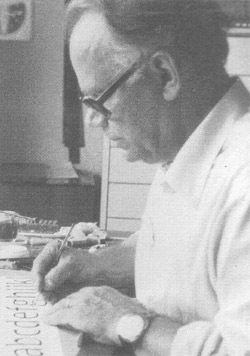 Friedrich Poppl
Friedrich Poppl was born in Soborten, Czech Republic, on March 1, 1923 and studied under the direction of Professor Herbert Post at the Offenbach University of Art and Design in Offenbach am Main, Germany. He continued his studies at the University of Applied Sciences in Wiesbaden and later taught there as a professor of typography. He was known as an award-winning calligrapher in the 1960s and took part in numerous exhibitions. At one point, Berthold AG asked him to design fonts exclusively for them. Poppl died on September 5, 1982 in Wiesbaden, just before the publication of his last font, Nero BQ.
The Know How section offers detailed background knowledge to deal with all enquiries about the use of fonts.