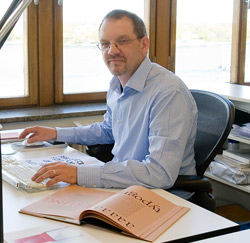 Örjan Nordling
Örjan Nordling has been involved in typedesign for over 20 years. He was trained in Graphic Design at The University College of Art Crafts and Design in Stockholm 1979–83 and at the Basle School of Design 1983–85. He designed the typeface Nordling® BQ, under G. G. Lange for H. Berthold AG, for which he received Excellent Swedish Form in 1996. In 1997 he was one of the founders of the Typographic studio Pangea design in Stockholm.
Throughout the years his work has included corporate typefaces like DN Grotesk and DN Bodoni for Swedish daily newspaper Dagens Nyheter and Enighet for Swedish Trade Union Federation. In 2004 Berling™ Nova was released, a redesign of Swedish classic typeface Berling Antiqua.
Together with Fredrik Andersson he was also responsible for Berling Nova Sans, a sans-serif version of this font.
In 2004 he received the Berling Prize, founded by the late Swedish designer Karl-Erik Forsberg.
The Know How section offers detailed background knowledge to deal with all enquiries about the use of fonts.