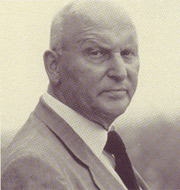 Günter Gerhard Lange
Günter Gerhard Lange was born on April 12, 1921 in Frankfurt on the Oder, Germany and died in Munich on December 2, 2008. He completed studies at the Academy of Visual Arts and Publishing in Leipzig, Germany in 1941. He studied calligraphy, typesetting and printing under Professor Georg Belwe. He remained in Leipzig and worked as a freelance graphic designer. In 1945, he started working as an assistant to Professor Walter Tiemann at the Leipzig Institute while doing freelance design and painting on the side. He moved to Berlin in 1949 to further his education at the University of Visual Arts. He returned to freelance work in 1950 and was hired by H. Berthold AG on a freelance basis. His first font designs came about during this period. From 1955 to 1960, he started to teach typography at the Master School of Graphics and Publishing. In 1961 he was appointed Artistic Director at H. Berthold AG and became Chairman of the Board of Directors in 1971. He also taught from time to time at various universities in Germany. In 1990, Lange retired from H. Berthold AG, but continued to teach typography and design. After ten years of retirement, he started working with H. Berthold AG again as their exclusive artistic consultant.
The Know How section offers detailed background knowledge to deal with all enquiries about the use of fonts.