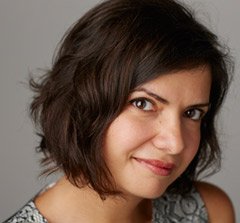 Nadine Chahine
Dr. Nadine Chahine is an award winning Lebanese type designer working as the Arabic Specialist at Monotype. She studied Graphic Design at the American University of Beirut, has an MA in Typeface Design from the University of Reading, UK, and a PhD from Leiden University, The Netherlands. During her study at Reading, she focused on the relationship of the Arabic and Latin scripts and the possibilities of creating a harmonious relationship between the two. Her typeface Koufiya was the first to include a simultaneously designed matching Arabic and Latin parts. She taught Arabic type design as a visiting lecturer at the American University in Dubai and at the Lebanese American University in Beirut. In 2005 she joined Linotype (now Monotype) in Germany, as the Arabic specialist and has been living in Germany since then. Nadine’s research focus is on legibility studies for the Arabic, Latin, and most recently, Chinese. Since 2012 she has been collaborating with the MIT AgeLab on legibility research or automotive HMI. Their first study has now been published in the Ergonomics Journal. Nadine has won several awards including the Award for Excellence in Type Design from the Type Directors Club in New York in 2008 and 2011, and a Certificate for Excellence from ISTD. Her typefaces include: the best-selling Frutiger Arabic, Neue Helvetica Arabic, Univers Next Arabic, Palatino Arabic and Palatino Sans Arabic, Koufiya, Hamra Str. and Big Vesta Arabic. She has also designed custom typefaces for clients such as mbc, Sony, H&M, An-Nahar newspaper, Abu Dhabi Ministry of Interior, and Credit Suisse. Her typefaces have been used by numerous brand owners such Emirates NBD, Etihad, Dubai Airports, mbc, OSN, and SKY News Arabia. Nadine’s work has been featured in the 5th edition of Megg’s History of Graphic Design and in 2012 she was selected by Fast Company as one of its 100 Most Creative People in Business.