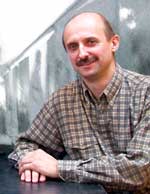 Brda was originally developed the Powiat weekly newspaper. The family was one of the winners selected in Linoytpe’s 4th International Type Design Contest (2004).

JP2 is based on the handwriting of Pope John Paul II, and Waza was inspired by a Wilhelm Hondius (Hondt) etching. Hondius was a Dutch court engraver for the Polish king, Ladislaus IV (Władysław IV) of the Vasa dynasty.

Franciszek Otto is also teaches graphic design at the Secondary Art School in Bydgoszcz, where his typefaces rank among the students’ favorites.
The Know How section offers detailed background knowledge to deal with all enquiries about the use of fonts.