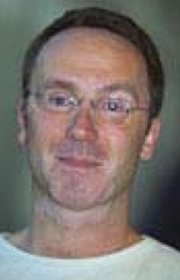 Andreas Koch
Andreas Koch created the font Linotype Projekt™ in 1999. Koch lives in Bielefeld, Germany, and is a freelance book and type designer. Koch designed the font with both a well-defined inspiration and goal. "It occurred to me that typefaces like Helvetica™ and Univers™ seemed to have a higher quality in hot-metal composition as with modern digital typesetting. They are stronger and livelier. This is in part due to the printing process, which presses the characters onto paper, and in part to the forms of the letters, which differ from the PostScript version of the same typeface. An important aspect of printing is the slight increase in character width resulting from the pressure which also serves as an optical correction to the forms. (True exact squares appear slightly barrel-formed to the eye.) I wanted to revive this peculiarity, not because of a nostalgic feeling, rather just because it is more attractive." The result is Linotype Projekt, a text font which is harmonious, clear and extremely legible.
Linotype Projekt is a Winner typeface from Linotypes 3. Type Design Contest.
The Know How section offers detailed background knowledge to deal with all enquiries about the use of fonts.