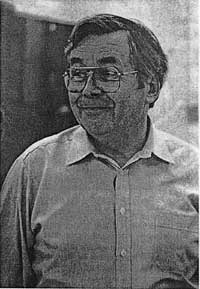 Karlgeorg Hoefer
Karlgeorg Hoefer was born on February 6th, 1914 in Schlesisch-Drehnow. Following schooling in Schlesien and Hamburg, he served a four-year typesetting apprenticeship from 1930-1934 in Hamburg. After two years of military service, he studied at the Kunstgewerbeschule (School of Arts and Crafts) in Offenbach am Main and then worked in Potsdam. From 1939 until 1945 he was in active military service and was also a prisoner of the Russians.

His activities as a calligrapher began after his employment as a calligraphy teacher at the Werkkunstschule in Offenbach. He then developed a universal pen with novel writing and drawing techniques for the company Brause (see illustration 1, 2 and 3).

From 1970 to 1979, Hoefer was a lecturer and later professor at the HfG (School of Design) in Offenbach. In 1976, he lectured at the Institute for Fine Arts in Cluj (= Klausenburg, Rumania). From 1981 to 1988, Hoefer ran summer calligraphy workshops in the USA (Los Angeles, San Francisco, Boston, New York, Washington, and other cities).

In 1982, Karlgeorg Hoefer founded a calligraphy workshop in Offenbach for everyone, with evening courses and summer school, and in 1987, the registered association "Calligraphy Workshop Klingspor, Supporters of International Calligraphy." From 1987 to 1995, he was the chairman of the association while teaching continuing courses and summer school classes with leading foreign calligraphers. 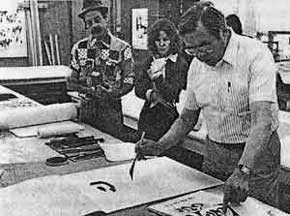 Workshop with Karlgeorg Hoefer
Outstanding one-man exhibitions by Hoefer took place in 1963 and 1984 at the Klingspor Museum in Offenbach, and in 1966 a traveling exhibition was shown in Scandinavia. Hoefer has also exhibited in 1975 at the Gutenberg-Museum in Mainz, in 1982 in San Francisco, in 1983 in Berkeley, California, in 1990 in New York, in 1994 at the Chamber of Industry and Commerce in Offenbach and Bad Soden, in 1996 at the Archive of the Calligraphy Workshop Klingspor.

Karlgeorg Hoefer’s creativity in calligraphy is also reflected in the varying materials he uses for his work.

For his activities as a calligrapher, Hoefer received the Silver Citizens Medal from the City of Offenbach in 1989, and was distinguished with the Order of Merit of the Federal Republic of Germany in 1993.

More information about Karlgeorg Hoefer are available at the website of the Klingspor Museum and www.kghoefer.de.

Illustration 3
The Know How section offers detailed background knowledge to deal with all enquiries about the use of fonts.