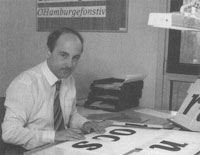 Reinhard Haus
Professor Reinhard Haus (born 25. 5. 1950 in Dörnigheim) created the font Guardi® and appeared with Linotype AG in 1986. This text font is based on the Venecian Old Face styles of the 15th century. The influence of characters originally written with a feather can be seen in many of the forms of this modern alphabet.
The Know How section offers detailed background knowledge to deal with all enquiries about the use of fonts.