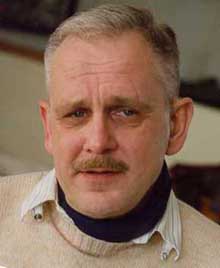 Gustavs Andrejs Grinbergs
Gustavs Andrejs Grinbergs was born in 1943 in Riga, Latvia. Activities in the following creative areas: publication design,advertising design, logos and art production, member of the Latvian Association of Artists.
Since 1987 the main fields of work were creating original typeface designs and adapting Western fonts for international use.
Since 1990 he cooperated with Latvian corporation Tilde in font development for all the European languages. For the original Western fonts he designed graphically identical and compatible Cyrillic character sets. Baltic, Central and Eastern European and Turkish
characters are added to the original character set as well.
In partnership with Tilde, over 500 fonts from Bitstream Type Library and about 1000 fonts for other foundries have been prepared for multilingual use.
Multilingual adaptations of well-known and best looking Western alphabets are widely used by newspapers and book publishers both in Latvia and now purchased on the web globally.

Samples of fonts adapted for use in Cyrillic script are shown at http://www.tilde.lv/fonts/fonts/languages/cyrillic.html

Samples of Latin fonts adapted for use in all the European languages are shown at http://www.tilde.lv/fonts/fonts/languages/latin_based.html

Read also the interview with Gustavs A. Grinbergs.