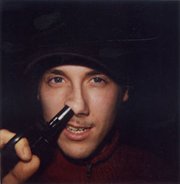 Critzla
The German designer Critzla created the fonts Linotype Down Town™, Linotype Go Tekk™ and Linotype Mindline™ in 1997. These fonts are included in the TakeType Library, chosen from the contestants of Linotype’s International Digital Type Design Contests of 1994 and 1997.

The cheerful character of Linotype Down Town is perfect for comics or posters. The figures dance across the base line, swinging between thick and thing, big and small. Linotype Down Town is intended exclusively for headlines and short texts in at least 18 point.
Linotype Go Tekk is available in three weights, thin, medium and black. It is a cool, constructed font with unusual cross strokes, appearing in almost every character at exactly the same height. The capital letters do not end on the baseline, rather drop even farther down than the descenders of the lower case letters, making it necessary to allow for generous line spacing. Linotype Go Tekk is a relatively static font designed exclusively for headlines and displays.
With Mindline, Critzla plays with geometry and typefaces. Each character is basically a rectangle with a geometric form etched in it which happens to be a member of the alphabet. This formal style comes from the advertisement typefaces of the 1920s and is reminiscent of the constructivist posters of this time. The appearance of the characters take priority over the funcitonality and the eye can hardly recognize the forms of letters and numerals which meet it everyday. Linotype Mindline makes us take another look at forms which we see so often that we hardly notice them, only reading them for the information which they impart, and the font is therefore best used when the content of the text less important is than the impression its forms make.
The Know How section offers detailed background knowledge to deal with all enquiries about the use of fonts.