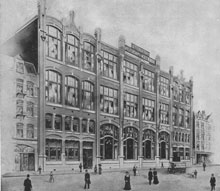 Tetterode Foundry
Nicolaas Tetterode established a type foundry in Rotterdam in 1851. In 1857, he moved to Amsterdam. After 1892, the company came to be known as “Lettergieterij ‘Amsterdam’ vorheen N. Tetterode.” The foundry’s most significant type designer was Sjoerd H. de Roos, who began working at the company in 1907. In 1963, the company merged with Bührmann’s Papiergroßhandel, and typefounding ceased in 1988. Some of the lead types would continue to be produced by the Fundición Tipográfica Neufville in Barcelona. All rights to the Tetterode typefaces, as well as their trademarks, were transferred to Linotype Library GmbH in 2000.
The Know How section offers detailed background knowledge to deal with all enquiries about the use of fonts.