Bad Homburg, 11 June 2007. The integration of state-of-the-art technology with design has rarely been so accessible. That, in a nutshell, was Linotype’s TypoTechnica™ 2007, which took place in April at the Gutenberg Schule in Frankfurt, Germany. The 4th TypoTechnica offered typography and software professionals a relaxed opportunity to immerse themselves in everything from the latest trends in design to fresh-off-the-press developments in digital high-tech, as well as some notable surprises. The attendance list read like a Who’s Who of the industry, as Linotype once again illuminated the path to the creative integration of technology with design.

Already in its short history, TypoTechnica has become known as the foremost international gathering for typeface designers, font developers and technology specialists. This year’s event included many new opportunities for practical training, as well, allowing visitors to interact directly with developers to learn the intricacies of various font technologies. And as particular highlight, Yuri Yarmola received the 2nd ever 2007 Font Technology Award.

To top it all off, a special surprise awaited conference participants on Friday, when Apple beamed in an unannounced video presentation featuring Peter Lofting – “The Font Guy” – and Daniel Fenwick. Lofting, head of font activities at Apple and Fenwick, who has worked in everything from creating customized contextual handwriting fonts to managing Apple’s advanced text layout technology. In any case, the very welcome surprise injected a rousing shot of adrenalin into the audience with an exploration of the latest advances in font development tools and software training.

The scheduled program began on an invigorating note as well, with keynote speaker Christian Schwartz whose commercial fonts have been released by many of the world’s leading digital foundries. His presentation, “Halfway There”, was an inspiring, introspective treatment of designer-user sensibilities, with a description of the tools he uses in creating designs and how he works with clients to realize their visions. Christian Schwartz clearly showed how creativity in design can also point the way for technology to follow.

Also generating much interest was the presentation of the 2007 Font Technology Award to Yuri Yarmola, Vice President of FontLab Ltd. and chief developer of the FontLab application. The Font Technology Award has been introduced by Linotype to honor extraordinary efforts in the development and support of font technology. Many will recall the first person to receive the award in 2005, David Lemon from Adobe. The second, Yuri Yarmola, has devoted his life, his finely tuned technical skills and his historical sensitivities to making practical tools for designers and font developers. FontLab, which he began to program in the early 1990s, is now the definitive font development tool for designers.

Other attractions of TypoTechnica 2007 included a guided tour of the typographic archives of the famed Senckenberg Library at the University of Frankfurt. The Library visit – despite being greatly overbooked – still found space for everyone who signed up and offered a unique chance to view rare historic collections, like the famous Fontlab and Microsoft, for helping to make Linotype’s TypoTechnica 2007 a forum for the presentation of groundbreaking technical know-how in stimulating exchange with the world of typography design. 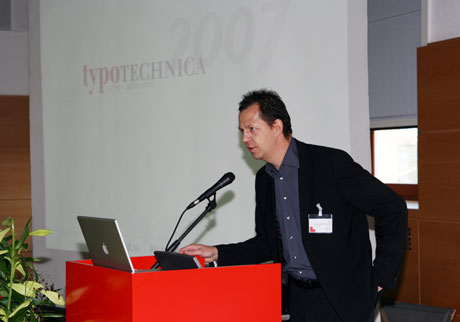 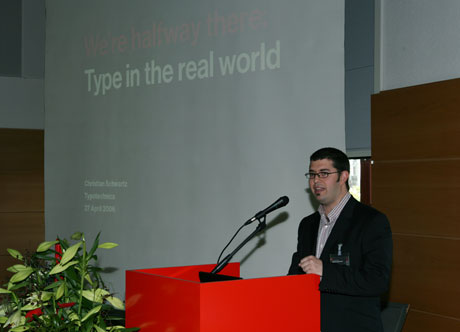 The conference’s keynote speaker was Christian Schwartz, the type designer
from New York. The theme of his presentation was “We’re halfway there;
Type in the real world.” The talk dealt with the relationships between a
type designer and his clients, as well as what OpenType can and cannot offer them. 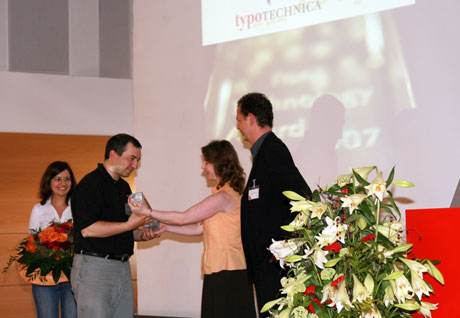