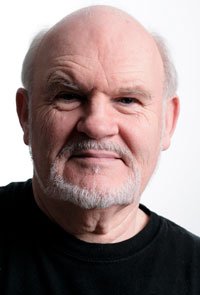 Rod McDonald
Rod McDonald has over forty years experience working with lettering and type. Much of his career was spent providing hand lettering and typographic styling to the Toronto advertising and design community. He was one of the first typographers to switch to the “Mac” in the mid ’80s and was soon providing custom fonts to ad agencies and design studios. He has designed logos for many leading Canadian magazines including Applied Arts, Maclean’s and Toronto Life. He has also created typefaces for these, and other magazines and corporations. He has taught typography at the Ontario College of Art & Design and NSCAD University in Halifax.

Rod’s typefaces include Cartier™ Book, his interpretation of Canada’s first
typeface, the Laurentian family, a highly successful magazine face originally developed for Maclean’s, Smart Sans™, named after Canadian design pioneer Sam Smart, his best selling Slate™ and Egyptian Slate™- families, ITC Handel Gothic™ and Gibson, a typeface he produced to honor John Gibson. Designed as an affordable font family for students, and to combat type piracy, all the proceeds from the sales of Gibson go to the Society of Graphic Designers of Canada (GDC) Design Education Committee. He continues to design custom faces for a wide variety of clients.

Rod is a fellow of the Society of Graphic Designers of Canada (GDC).
He is a member of RGD Ontario, the Type Directors Club (TDC) and the Association Typographique International (ATypI).
He is a founding member of the Type Club of Toronto and an ex-board member of The Society of Typographic Aficionados (SoTA).
In 2007 he was a judge at the Type Directors Club TDC2 show in New York.
In 2011 his typeface Egyptian Slate was recognized by ATypI Letter.2.
He writes a regular column on type for Applied Arts magazine.