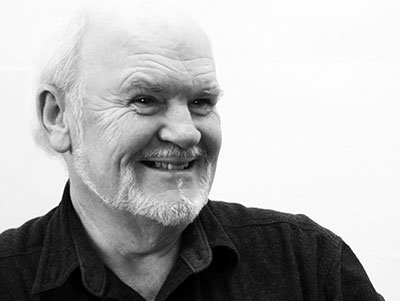 How did you fall in love with type design?
It may sound a little strange but I actually had to learn to love type design. I started my career as a lettering artist and I really wasn’t that interested in type. In fact I can remember thinking it was rather boring. But as I became more involved in the business, and got a little older, I began to see that type was actually more interesting than I thought. As a lettering artist I was also surprised to discover how difficult type design is.

How many typefaces have you developed until now?
I don’t keep track of these things so I honestly don’t know how many custom faces I’ve done over the years. Besides some of them I wouldn’t admit to doing anyway. But I can say that Monotype have the most important typefaces I’ve done. Which, now with Classic Grotesque, is seven families.

Is type design what you are mainly doing? What is your profession aside from type design?
I still do the occasional wordmark or logo but now I try to concentrate on type design.

What techniques did you use creating your font and what was the process for creating the design?
Classic Grotesque was started in Fontographer and about halfway into the project I switched to FontLab, which wasn’t the brightest thing to do, but that’s another story! Otherwise, aside from the odd pencil sketch for my own use, the entire family was drawn on screen.

What was the greatest challenge you faced while creating your typeface?
Classic Grotesque was more difficult than I had imagined it would be, largely because I was working with the same design Monotype used over thirty years ago when they developed Arial. For a long time it didn’t seem to matter what I did the similarity to Arial was always apparent, at least to me. But by going back to those early German grotesks I was able to sidestep Arial. It also gave me another direction for the design, one that I feel looks a bit resher and adds an extra dimension to the genre.

Please describe the look and feel of Classic Grotesque.
I’m probably the last person you should ask about this. Before I even started I decided that Classic Grotesque had to be more than a nostalgic revival of the early grotesques. Much as I love those early grotesques I wanted a typeface that looks more at home today than in the late nineteenth century. Another strong feature of the design is the more open fitting, and after two generations of tight-fitting sans I feel it brings a refreshing look to the grotesque range.

What are the unique details which you think distinguish Classic Grotesque?
Aside from the fit, which I mentioned before, probably the single most important feature is the high center of gravity that runs throughout the range. The crossbars in characters such as “E”, “G”, “H” and the high crossbar in the center stroke of the “a” echo the look of the early sans like Venus. I did eventually lower the crossbars a little more than those in Venus because I found them distracting in text, however they are higher than in the original Monotype Grotesques.

Anything else you would like to share?
Like a number of typefaces, Classic Grotesque owes much to others. Robin Nicholas at Monotype found material in the archives at Salfords that helped me better understand the Grotesques. Robin also critiqued the series as it progressed and his critiques were invaluable. Matthew Carter made a significant contribution simply by impressing upon me the benefits of the more open fitting. Jim Wasco and Patrick Griffin helped me survive the switch to FontLab midway through the project and I’m happy to say we’re still friends. I should also mention that it was Patrick who suggested the name “Classic”. Last, but not least, I owe much to Allan Haley at Monotype. Somehow he managed to keep the project, and me, on course.
The Know How section offers detailed background knowledge to deal with all enquiries about the use of fonts.