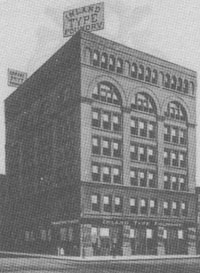 Inland Type Foundry
Founded in St. Louis in 1894 by the sons of the owners of the Central Type Foundry, the Inland Type Foundry was the first company to introduce a standard baseline, an idea that would later be adopted the world over. In 1911, the company liquidated and the inventory was dived between American Type Founders and Barnhart Bros. & Spindler.
The Know How section offers detailed background knowledge to deal with all enquiries about the use of fonts.