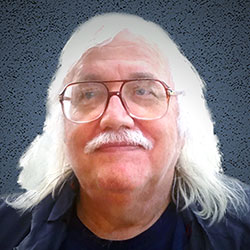 Jim Spiece
Jim’s fascination with letterforms began at an early age. His father’s small-town store in Indiana was originally lettered by a local sign painter. Young Jim sat amazed as he watched how the store’s name took shape. Time passed and the huge 50s style block letters faded. Jim was now old enough to climb a ladder and paint over them himself. All this served as Jim’s introduction to the world of commercial art as it was called back then. Soon after—price signs, sale signs, all kinds of signs—started popping up inside his father’s general merchandise store.

After high school, came college. And after graduation came his first real job—a year-long stint at New York advertising agency Ogilvy and Mather. But Jim decided he was not cut out for Madison Avenue. He returned home to Indiana and set up a modest graphic design studio. He liked the fact that he could now either accept or reject work. Basic arts related projects such as sign painting, logos, and fliers eventually led to bigger, better, more interesting projects. Then the digital revolution really hit. Jim decided to take a stab at type design. He submitted many original designs to International Typeface Company—all with pretty much the same disappointing results. But one day, instead of a rejection, a typeface revival was actually accepted—ITC Blair™, originally created by the Inland Type Foundry at the turn of the twentieth century.

Jim continued to produce type revivals and his own original designs—but held on to his local clients. He is probably best known for his FontHaus revival of the Bernhard Gothic SG family designed by Lucian Bernhard. Other important revivals include the Nicolas Jenson SG family (Eusebius) by Ernst Detterer and the Stellar Classic SG family by Robert Hunter Middleton. You will also find the Eva-Antiqua SG family (Koch-Antiqua) by Rudolf Koch and the Wellsbrook Initials SG family (Weiss Initials Series) by Emil Rudolf Weiss to be useful additions to the Spiece Graphics list of historic typefaces. Jim has also introduced original designs including the El Castillo SG and the Melrose Modern SG families. Some interesting single designs are Gambit Nouveau SG and San Remo Casual SG.

Over the years Jim’s distinctive typographics and logos have been sought by clients as diverse as the Wall Street Journal (Europe), U.S. News & World Report, and Bath & Body Works. He has also refined newspaper nameplates for The Richmond-Times, The State (South Carolina), and The (Newark) Star-Ledger.
The Know How section offers detailed background knowledge to deal with all enquiries about the use of fonts.