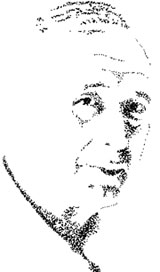 Giovanni Mardersteig
Giovanni Mardersteig created the font Dante® in 1957.
Mardersteig started work on Dante after the Second World War when printing at the Officina Bodoni returned to full production. He drew on his experience of using Bembo® and Centaur® to design a new book face with an italic which worked harmoniously with the roman. Originally hand-cut by Charles Malin, Dante was adapted for mechanical composition by Monotype in 1957. The new digital font version has been re drawn, by Monotype’s Ron Carpenter, free from any restrictions imposed by hot metal technology. The Dante font family was issued in 1993 in a range of three weights with a set of titling capitals. Dante is a beautiful book face which can also be used to good effect in magazines, periodicals etc.

Dante Font Family is part of the Monotype Library OpenType Edition.
The Know How section offers detailed background knowledge to deal with all enquiries about the use of fonts.