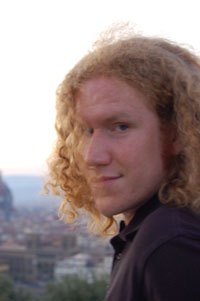 Dan Reynolds
Three typeface families on Linotype.com were created by Dan Reynolds: Malabar™, Morris Sans®, and Mountain. Mountain, from Volcano Type in Karlsruhe, is a 2005 digital revival and extension of Teutonia, an old metal typeface released by the Offenbach Roos & Junge type foundry in 1902. Dan followed this up in 2006 by redrawing, updating, and expanding Bank Gothic, a sans serif design by Morris Fuller Benton; the result was released by Linotype as Morris Sans. Malabar stems from Dan’s MA studies in Reading. It is a sturdy oldstyle serif family; try it out in newspapers!

Dan Reynolds was also involved in the Carter Sans™ project, a sans serif typeface designed by Matthew Carter that was released by ITC in 2011.

Malabar received a Certificate of Excellence in Type Design at the Type Directors Club of New York TDC2 competition in 2009, the Silver Award for Original Typeface Design at the 2009 European Design Awards, Gold Award the for Typeface Design at the 2010 Joseph Binder Awards in Vienna, and one of ten Golds from the Design Prize from the Federal Republic of Germany 2010. The Design Prize of the Federal Republic of Germany is that country‘s highest distinction in the field of design.
The Know How section offers detailed background knowledge to deal with all enquiries about the use of fonts.