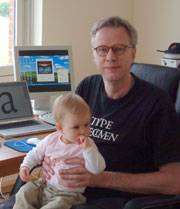 Frank E. Blokland
Frank E. Blokland has a strong aversion to typefaces that are casually made, or careless re-works of earlier designs. His uncompromising opinions about type are evident not only in the many articles he has written, but also in the typefaces he has drawn.

An Award-Winning Start
Blokland studied graphic and typographic design at the Royal Academy of Arts in The Hague from 1978 to 1982. While still a student he founded the successful working group Letters, from which many well-known Dutch type designers have emerged.
In 1985, Blokland won a type design contest with a face called Bernadette, which was then published as a dry transfer font. (Today, Blokland considers Bernadette an immature exercise and has declined to issue it as a digital font.) After Bernadette, Blokland designed a monument and lettering for the Royal Dutch Mail. More lettering assignments followed, including the Homomonument near the Westerkerk in Amsterdam, the plaque at the Jewish Orphanage in Leiden, and the Franciscanessen-monument in Oegstgeest.
When famed teacher Gerrit Noordzij retired in 1987 from the Royal Academy of Arts in The Hague, Blokland was the first of the younger generation of designers to succeed him. Blokland now lectures in letter drawing, type design and font production courses at this institute.
In 1990 Blokland founded the Dutch Type Library (DTL), which was the first digital type foundry in the Netherlands. Since its founding, DTL has released many exceptional typeface designs; two of these have been in conjunction with Monotype.

Two Uncompromised Faces
Uncompromising as he is in his own work, Blokland also has used his gifts to help undo compromises other designers have been forced to make in the past. Consider the histories of Haarlemmer™ and Albertina™, two faces that received exquisite revivals at Blokland’s hand.
Blokland’s Haarlemmer is a recreation of a never-produced Jan Van Krimpen typeface. The original was drawn in the late 1930s to set a new edition of the Bible, using Monotype metal typesetting. Fonts for these machines had to be created within a crude system of predetermined character width values. Even the italic characters often had to share the same widths as those in the roman design. Van Krimpen believed this severely impaired the design process. The invasion of Holland during World War II halted all work on the Bible project, and the original Haarlemmer never went into production.
Blokland wanted to revive the Haarlemmer design, but this time as Van Krimpen would have intended. He reinterpreted the original drawings and created a typeface that matched Van Krimpen’s concept as nearly as possible, minus the technical limitations of metal typesetting. The result goes one step beyond authentic: it shows how Van Krimpen wanted the face to be designed in the first place.
The revival of Albertina offers a similar story. In the early 1960s, designer and calligrapher Chris Brand aspired to draw a typeface based on the principles of calligraphy. Unfortunately, typesetting technology still put restrictions on typeface design, and Brand was never completely satisfied with the results of his efforts.
Blokland revived Albertina by using Brand’s original drawings as the foundation of a digital re-make. With the full backing of Monotype, and with Chris Brand looking over Blokland’s shoulder, a new design for Albertina emerged that displayed all the grace and verve of Brand’s original sketches.

Albertina Font Family and Haarlemmer Font Family are part of the Monotype Library OpenType Edition.
The Know How section offers detailed background knowledge to deal with all enquiries about the use of fonts.