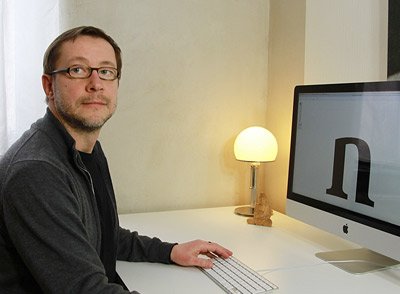 How did you fall in love with type design?
At first I was just fascinated by what you could express simply through combining 26 letters and a couple of punctuation marks. Then, as I remember it, I began to look at characters in more detail and marvel at them – the way they were used on a book jacket, a poster or even a truck tarpaulin. As a child, I started enlarging logos to gigantic formats and thus commenced drawing my first letters. I must have fallen in love with the compelling form of letter characters, because I next started to construct my own alphabets.

How many typefaces have you developed until now?
Three font families, consisting of a total of 130 different cuts. I’ve called them Generis® (2006), Aeonis™ (2009) and Xenois™ (2013); all three have been published by Linotype. So I produce a new font family every couple of years. My next family is already at the planning stage and I imagine that this will not be my last.

Is type design what you are mainly doing? What is your profession aside from type design?
My heart belongs to type design. At the same time, I have produced commissioned printed works and images. And logos, of course, because logo design and typeface design are very similar disciplines – at the core of both processes are simplification and the generation of clarity. I also teach and pass on my experience to students interested in the subject, just as my teacher Reinhard Haus showed me and as he was shown by his teacher, Adrian Frutiger.

What inspired you to design your typefaces?
There were various influences. In the case of Generis, it was the typographic chaos I encountered in a shopping centre that encouraged me to create a font family that could be used in as many different contexts as possible. A font with almost inexhaustible combination potential. The inspiration behind Aeonis was a ceiling lamp designed by Wilhelm Wagenfeld. Its angular-rounded glass shape that had been reduced to essentials I used as my model. I have combined elements of my two previous fonts in Xenois, further developing the principles of diversity and reduction. The result is something that, as far as I am aware, has never before been attempted in the history of typography – a simplified Antiqua typeface.

Are you influenced by other typefaces by the design of your typefaces?
Of course. Before I began designing my own alphabets, I systematically examined the forms of other typefaces. My favourites were the sans serif fonts of Adrian Frutiger and Hans Eduard Meier, although at the time I had no idea what this meant or who these persons were. While training at Linotype, I was lucky enough to meet both of them and get to know many other typefaces and their designers. This naturally had an influence on me. As did my work on Frutiger® Next and the many other typefaces at Linotype.

What was the greatest challenge you faced while creating your typefaces?
The process of creation. Identifying the various shared features among the massive range of fonts available, and the impressions and influences of my surroundings. Finding a basic concept that will unify all this – like an optical code – and the necessary inspiration to allow a new font to develop quite naturally on its own. Working on my concept until it quietly, unobtrusively and almost prosaically assumes the forms of the characters I want. Discovering the correct balance between external and internal form, between familiarity and novelty, between necessity and effort. All this is a challenge every time. And I absolutely love it.

Are there aspects of the design that you think should be highlighted, or you particularly want the graphic design community to know about your typeface?
Yes. As Goethe once said: “Even the most clearly written text is illegible in the dark”.