When a man reaches the age of 87, it is always a reason for celebration. When this man happens to be Hermann Zapf, a person who has shaped the history (and continues to shape the future) of modern typography, it is a reason to celebrate with respective style. Under the motto “finest hours revived”, Linotype chose to host this special event in an atmosphere aptly reflecting Hermann Zapf’s own style: a mixture of exquisite attention-to-detail and warm-hearted generosity. The result was an evening among friends rich with memories and new visions on the 24th of November 2005.

The celebration began with a surprise. Hermann Zapf believed he was going to spend the evening with a few close friends. Little did he know it would be party of nearly 40, with many guests who had especially flown in from the United States. All the more surprising as it was the American holiday of Thanksgiving! The Schlosshotel Kronberg, not far from the Linotype headquarters in Bad Homburg, was an ideal place for the celebration: representing a deep appreciation of European tradition while, via the guests, also paying tribute to the United States, which has played such a significant role in Hermann Zapf’s life and career. After warming up in the bar, the guests were invited to enter the Red Salon. White tablecloths, fresh flowers, three sets of silverware at each place – everything was prepared to perfection.

Linotype Managing Director Bruno Steinert officially opened the evening by describing some impressions of working with Hermann Zapf. While travelling together in Spain, Steinert witnessed Zapf’s ability to write by hand perfectly formed letters with only 1 mm cap height. He is a refined craftsman who also knows how to use new tools. “To this day,” Steinert conceded, “Hermann Zapf continues to drive font technology to the edge, as for example with the release of Palatino nova in the Linotype Platinum Collection“. This typeface is a reinterpretation of a classic which Steinert was pleased to officially premiere that very evening. As an OpenType format, Palatino nova encompasses a far wider range of characters and many meticulously reworked designs. Other unique features include special titling variations as well as Cyrillic and Greek characters. For immediate appreciation, an especially designed poster and postcard series displayed Palatino nova in all its splendor. And also the menu was beautifully set in the new typeface. Elegant texts for respectively prepared delicacies.

Plates of veal carpaccio with rucola and thinly sliced Parmesan came and went, while close friends and colleagues of Hermann Zapf took turns revisiting memories of unforgettable encounters and historic collaborations. Designer and multi-talent David Siegel vividly recalls Zapf dropping a flower from a spiral staircase – which landed directly on the head of a woman passing by below. Rick Cusic from Hallmark remembers Zapf as an elegant and hard-working designer who was always quick to smile. Calligrapher Cathy Waters, whose birthday was being celebrated in tandem, prepared a moving speech which she delivered in faultless German. Her husband, Julian Waters, made use of a language more universally familiar, drawing attention to surprising numeric combinations. For instance, added together, the digits of that evening’s date 11/24 produce the number 8, i.e. for the 8th letter in the alphabet “H” (as in Hermann). Adding the digits together separately (1+1 and 2+4) then produce the number 26, representing the first letter of the name “Zapf”.

While the guests nipped at truffled leek foam, RIT printing historian David Pankow related an amusing anecdote of transporting many cases and galleries of original Zapf typefaces. Driving an old truck on a bumpy road, he winced every time he hit a pothole or stepped on the brakes and heard the cases rattling and shifting behind him. He believed he could almost hear all the delicate serifs of the hotmetal Palatino characters being broken off! Fortunately, the typefaces survived unscathed. Or perhaps it was a premonition of the upcoming release of Palatino Sans in 2006?

Like many of the speakers, for Linotype’s Type Design Director Akira Kobayashi, reading Hermann Zapf’s book “About Alphabets” marked a turning point in his life. How could he have imagined he would one day work side by side with the very master who opened his eyes to the subtleties of Western typography? In close collaboration with Hermann Zapf, over the last four years Kobayashi has brought out Optima nova, Zapfino Extra and now Palatino nova. Working with Hermann Zapf has been a great honor, he summarizes, but also a lot of hard work. The two of them usually start their working day at just after 8 in the morning and keep working right through to 5 in the evening – with only 20 minutes break for lunch. As the guests sliced their delicately broiled venison, they briefly raised their eyebrows and smiled at the thought of such a rushed meal. “But there is no way to say no to Hermann Zapf” Kobayashi adds. Then he unfolded a large thank you note handwritten by Zapf after one font was completed to his satisfaction. Kobayashi sighs: “This beautiful OK makes all of the trouble worthwhile”.

There were many other inspiring anecdotes, unfortunately, not all of which have space for retelling in this short review. Nevertheless, one last speech deserves brief mention. While nibbling on iced cappucino tartlet, the guests were treated to excerpts from the classic German poet Rilke, quoted by the over 90-year-old former Frankfurt Book Fair Director, Siegfred Taubert. “Our birthday boy,” Taubert concluded “is as big and shining as the Christmas tree in the castle foyer!”

Finally, the focal point of the evening himself, Hermann Zapf, stood up to say a few closing words. “In the alphabet I’m always last,” Mr Zapf admitted. In the same tone of whimsical understatement, he disclaimed all previous praise as over-exaggerated. Then, candidly, he offered an explanation for his ongoing intense energy and dedication to typography: the technological progress over the last decades has finally made it possible to create typefaces exactly as he had always dreamed. And he still has a lot of catching up to do in the years to come!

The final surprise came almost without notice. During the final speeches, it had softly and silently begun to snow outside the large latticed windows. Bruno Steinert beamed, “It’s the first snow of the year! Every time we celebrate Hermann Zapf’s birthday, we always get the first snow.” Steadfast reliability and inexplicable magic. A certain sign for the continued success of Hermann Zapf and his work. And the market launch of the new typeface in the Linotype Platinum Collection – Palatino nova. 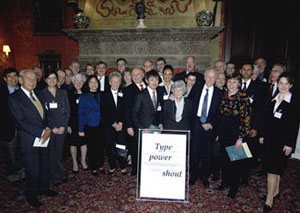 All guests came together in the Schlosshotel Kronberg, Germany 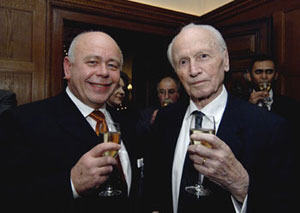 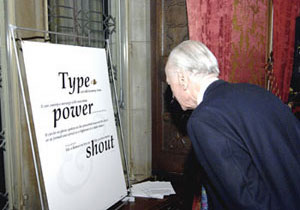 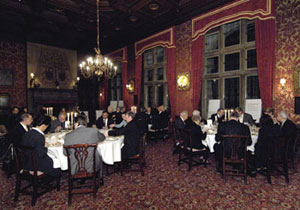 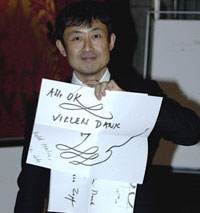 One of the speakers, Akira Kobayashi, gave a personal insight of his work with Hermann Zapf 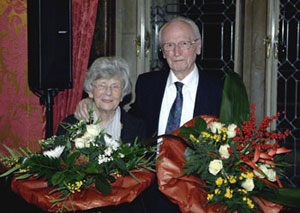