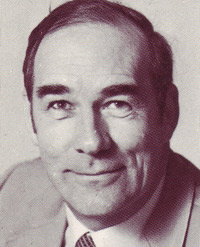 Gustav Jäger
Gustav Jaeger (born 1925, died in July 2010), son of a printer, studied at the Hochschule für Gestaltung in Offenbach am Main. An enthusiast for type and typography from an early age, he started his career at the Bauer typefoundry, where he developed type specimens promoting the work of Konrad Bauer and Walter Baum. Encouraged by the former, he designed contemporary 1970s display types for H. Berthold AG. He progressed to text types, the first of which, Seneca® BQ, was released by Berthold in 1977. Many others followed, highlighting Jäger’s ability to experiment successfully with letter forms for text use, and contributing significantly to the Berthold library. Jäger’s typeface Catull™ is currently being used in the logotype for the search engine Google.
In 1980, Gustav Jäger designed Becket™ for Linotype. Becket embodies a retro-medieval aesthetic. Base letterforms that might have been at home with a writer of Irish uncials have been streamlined according to late 20th century tastes to create a timeless effect. Becket is the perfect font to set headlines and logos for clients in the music industry.
The Know How section offers detailed background knowledge to deal with all enquiries about the use of fonts.