Whether Garamond™, Baskerville™ or Bodoni™, many of the typefaces produced during the 20th century were revivals of centuries-old models. Not so of Palatino®: Hermann Zapf´s new design is an interpretation of our own time.
Designed between 1948 and 1950, Palatino was first released as in lead type form by the German typefoundry D. Stempel AG in Frankfurt, and quickly became one of the world´s most popular typefaces. Palatino was thereafter altered for use on the Linotype machine and in photo-type composition. Due to customer demand and the desire to keep designs similar across competing formats, the adaptions of Palatino for newer technologies maintained the compromises that had been made in previous generations and older media, even into the digital age.
Palatino´s esteem has long required a comprehensive revision. The 2005 release of the Palatino nova type family from Linotype marks both a return to the original Palatino idea, and an extension of that idea to the future. 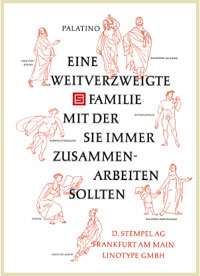