What exactly sets Palatino® nova apart from older incarnations, as well as from other typefaces?

Aside from its revised form, Palatino nova can be applied to every imaginable typographic application. In addition to its extensive character set, encompassing all Western European, extended Central European, Greek, and Cyrillic glyphs, the new family contains two display weights (Palatino nova Titling and Palatino nova Imperial), the redesigned book face Aldus® nova Book. Many of the fonts also include Small Caps, inferior and superior numerals, proportional and tabular Oldstyle figures, proportional and tabular lining figures, ordinals, superior lowercase letters, superior currency symbols – all of which are easier than ever for designers to set, thanks to the new OpenType font format.

Technological restraints have historically influenced the finished outcome of a type design. While Hermann Zapf´s drawings for the original Palatino were made with ink on paper, his types were cut by hand, and then machine, into metal. Later, the phototype masters were masked friskets. The outlines of the old Palatino still reflected these sharp traces of the knife, and their corners were sharp points. In close-up views of Palatino nova however, one can see that many corners have now been modeled: complex angular constructions smooth out these corners and temrinals, making them more pleasing to the eye, as well as inherently more legible. Palatino nova´s serifs in general have been reconceived, on the whole they have been shortened, and they show more continuity.

The ability to kern was limited with metal type. Some of the letters in previous Palatino versions – for instance the "f" of the "j" – always looked a little stunted due to the restrictions of hotmetal matrices. In Palatino nova, these characters have found their lyrical, calligraphic flow, which was always their intention. The italic faces are also much more harmonious: their letterforms bear more internal similarities with one another, many excess flares have been removed. 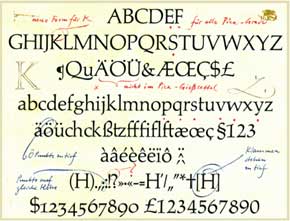