Giovanbattista Palatino, after whom the Palatino® typefaces are named, was a writing master of the 16th century in Rome. His work inspired Hermann Zapf, although none of Hermann Zapf´s typefaces could be said to be literal revivals of Giovanbattista Palatino´s letters. Yet many of the characteristics of the Palatino typefaces, such as its open counterforms and overall legibility, are certainly themes that had previously inspired Renaissance lettering. The Palatino typefaces´classical proportions place it within the great heritage of Roman types, yet it has an unmistakably specific style of its own.

At D. Stempel AG, the original Palatino Roman and Italic punches were cut by hand by the great punchcutter August Rosenberger. Just as August Rosenberger cut the original Palatino types by hand in metal, the Palatino nova type family was carefully drawn in digital format by Akira Kobayashi, Type Director at Linotype. Palatino nova is sure to be appreciated by type lovers the world over. 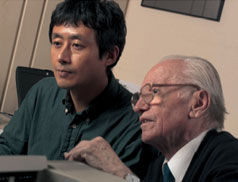