Home
ATDC 2005
Members of the Jury

Kris Holmes was born and raised on a small family farm in California. She studied calligraphy with Robert Palladino and Lloyd Reynolds at Reed College, and modern dance with Judy Massee. She later studied calligraphy and type design with Hermann Zapf, and lettering with Ed Benguiat in New York, where she also studied modern dance at the Martha Graham and Alwin Nikolais schools. She received her B.A. from Harvard University and has done graduate work at the UCLA Animation Workshop.
Her calligraphy and lettering have appeared in Scientific American, Fine Print, and other magazines and journals. Her work has been exhibited at SIGGRAPH, Mills College, and Rhode Island School of Design, and is in the permanent collection of the Klingspor Museum, Offenbach, Germany and the Melbert B. Cary Collection of Rochester Institute of Technology. Her type designs and lettering are found in signage in the MusŽe du Louvre, Paris, Ghirardelli Square, San Francisco, and the
Walter Lantz Animation Studio, UCLA.
Kris Holmes has created over 100 typeface designs, including several popular and widely distributed script typefaces: ITC Isadora™, Kolibri, Apple Chancery (based on Renaissance Italic handwriting, and Apple Textile. With Charles Bigelow, she also designed several other fonts distributed by Apple, including Capitals and the TrueType versions of New York, Monaco, Geneva, and Chicago.
With Charles Bigelow, she co-designed the Lucida®, extended family of typefaces, which in addition to Latin alphabets, includes several weights and styles of Greek, Cyrillic, Arabic, Hebrew, Thai, and Devanagari scripts.
Her Lucida designs have also been widely used for scientific and technical publishing in Scientific American, Notes of the American Mathematical Society, and other technical and scholarly publications. Also with Bigelow, she designed the Lucida icons, stars, and arrows that Microsoft rearranged into the Wingdings fonts.
Kris has taught letter and type design courses at Portland State University, the Portland Museum Art School, Rhode Island School of Design, Santa Monica College, and the Otis College of Art. She has also taught type design tutorials for the Unicode consortium and the Raster Imaging and Digital Typography conferences.

Back to the first page 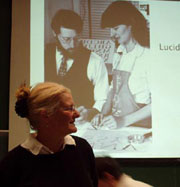