Home
ATDC 2005
Members of the Jury

Fiona specializes in non-Latin type design and typography. From 1978 to 1989 she worked for Linotype Limited (U.K), being responsible for the design of Linotype’s non-Latin fonts and typesetting schemes, notably those using Arabic, Indic, and Thai scripts. Since 1989 Fiona has worked as a consultant: clients include Adobe, Apple Computers, Linotype, and Quark. As a type designer she has recently worked in collaboration with Tim Holloway and John Hudson. Fiona is also a part-time lecturer in the Department of Typography and Graphic Communication at the University of Reading (U.K.), and is the author of one book and numerous articles.
Fiona holds a BA (Hons) in German; a Postgraduate Diploma in Sanskrit and Pali; and a PhD in Indian Palaeography from SOAS (London University). She is a member of ATypI’s Board of Directors and a Fellow of the Royal Society of Arts.

Back to the first page 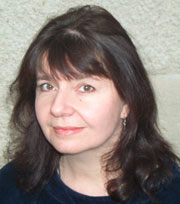