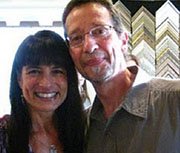 Steve Zafarana
Steve Zafarana was born in Wakefield, Massachusetts in 1951 and studied at the Montserrat College of Art. His career began at Compugraphic in 1977 and he worked in font creation there for several years. In 1984, he went to Bitsteram Inc. and ten years later founded the Galápagos Design Group with four other designers. He joined Bitstream after seven years. Eventually he founded his own office, Tail Spin Studio, where he creates illustrations and other graphic works for different customers.
The Know How section offers detailed background knowledge to deal with all enquiries about the use of fonts.