With the invention of the printing press, a longing for formal refinement began to awaken. First leaning on the bold and distinct typography of incunabula, styles gradually progressed to culminate in the decorative classical fonts of the 17th and 18th centuries. This growing preoccupation with ever greater refinement was also reflected in the architecture of the times, as well as in objects of daily use, especially furniture. But also the fashionable attire worn by the upper classes of each epoch paid tribute to this development accordingly.

The mutation
At the dawn of the 19th century, the newly established Republic of France was still groping to come to terms with its new identity – and as widespread industrialization set in, an intrinsic mutation began to take place in all external appearances. The search for a new look became a time-consuming quest eventually dragging into a decade-long struggle. This can be observed in the architecture of the early 19th century: on the one hand, there was a mixture of styles borrowing from numerous past eras, on the other hand, there was a clear will to find a new form of expression, inspired by the inventions of the time, like the railway and, later, the use of concrete as a building material (see Fig. 1a and b). This confusion was also reflected in typography, which commonly applied an incongruous melange of all previous typeface styles (see Fig. 1c).

The end of the line
In order to better understand the transition from typefaces with serifs to those without, it is necessary to consider the deeper impression left behind by the appearance of a line. Every line which does not close in on itself has a beginning and an end. If such a line does not have fortified endings, the observer is left with the uneasy feeling that something is incomplete, the line could flow on forever.
Just as an example, let’s have a look at a cross – as not to be influenced by the accustomed appearance of a letter. A cross without line endings is primarily perceived as an abstract symbol with two converging lines in the middle. The length of the lines is undefined, the lines appear to be able to continue on forever. However, as soon as the lines are given graphic boundaries, the symbol is suddenly perceived as complete entity (see Fig. 2).
Such fortification of line endings has given rise to ever changing styles of decoration for ages, attributing to the cross a unique symbolism each time (see Fig. 3).
Looking at the evolution of the Latin alphabet, the first stroke endings can be found in the chiseling of Roman capitals. In calligraphy, the emphasis on the stroke beginning and ending is what characterized the stylistic appearance of the text (see Fig. 4).
Perhaps these stroke endings also had something to do with an unconscious searching for stability, as the lower serifs of incised fonts actually seem to be "standing" on an invisible line.
With respect to architectural developments, characters marked with serifs at their endings could easily be compared with the columns of almost any stylistic period. In former times, a column was always decorated with a base at the bottom and a capital at the top (see Fig. 6 top). It was not until the birth of modernism that architects ventured to introduce a naked column, made of concrete. The fear that a line without boundaries might flow on forever gave way to a worldview defined by rationality – heralding the beginning of widespread use of sans serif typefaces (see Fig. 6 bottom). 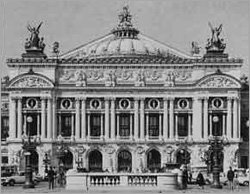 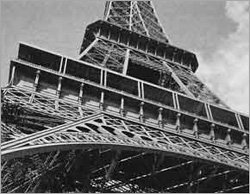 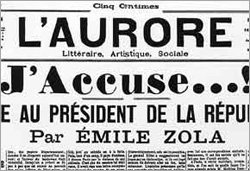 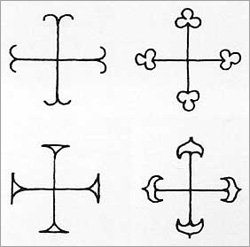 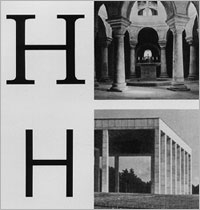