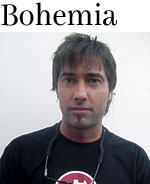 Eduardo Manso
Eduardo Manso is graphic and type designer. He is born in Argentina, in 1972. Studied graphic
design in the School of Visual Arts "Martín A. Malharro" of Mar del Plata, Argentina. He has attended the graduated degree course “Design and visual communication” in the “Universidad Nacional de Mar del Plata”. Eduardo Manso has designed and published several types through ITC (International Typeface Corporation), Bitstream Inc. and [T-26 ] Fonts, among others. He is now living in Barcelona, Spain, where he works as graphic designer and runs his own small foundry, Emtype Foundry.

Eduardo Manso designed the Bohemia™ display type family in 2003.
Bohemia’s elegant design shows off refined letterforms that evoke the Transitional style of typeface design. The feeling given by the type is vaguely similar faces like Baskerville. Baskerville revivals tend not to be as curvaceous as Manso’s contribution, however!
Slightly condensed, with a high amount of stroke contrast, Bohemia can function well in text settings as small as 9 point. The Bohemia family can create full typographic/hierarchic systems; the family includes Regular, Bold, Italic, and Small Caps styles.
This fantastic face has, with its stoic vertical axis, has been catching notice: under the name Argot, the design received a Certificate of Excellence in Type Design, from the Type Directors’ Club of New York. This made it one of the winners of the TDC2 2004 type design competition. Also, the typeface will was selected for inclusion in the 21st International Biennale of Graphic Design 2004 in Brno, Czech Republic. Bohemia was later named one of the most relevant works in the Bienal Letras Latinas 2004, which took place in Buenos Aires, Argentina, San Pablo, Brazil, Santiago, Chile, and Veracruz, Mexico.
Last but not least, the globetrotting Bohemia design received one of the three first-place awards in the 2003 International Type Design Contest, sponsored by Linotype GmbH.

ITC Merss™ proves that sometimes accidents work out just fine. Late one evening Eduardo Manso spilled coffee on his desk. When he began to wipe up the mess, he noticed that one of the splashes looked like a roman letter ’l’ - complete with serifs. This triggered his imagination. “What if a complete alphabet was created with this same irregular flow to the character designs?” ITC Merss was the result of Manso’s experiments with “fluid” letter shapes. The oddly handsome design looks aged and spontaneous at the same time. Its irregular texture is striking-the result of careful modeling of character shapes. While Manso wanted to maintain the free-form character of spilled liquid, he also knew the individual letters had to work together with an underlying harmony. When not experimenting with typefaces - or spilled coffee - Manso creates award-winning graphic and publication designs. A contributor to the design magazine el Huevo (the Egg), he also writes articles on type and typography and is part of the publication’s design team.
The Know How section offers detailed background knowledge to deal with all enquiries about the use of fonts.