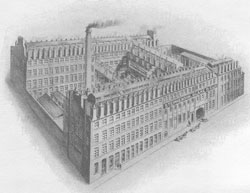 Stephenson, Blake and Co. Foundry
Typefaces designated as Latins were popular during the last half of the nineteenth century. One of the styles that continued to be popular into the twentieth century is the bold condensed Latin variant. Readily identifiable by its triangular serifs and sharp terminals on the strokes of some of the lowercase letters, Latin™ Condensed makes an interesting display type and its condensed proportions easily solve many copy fitting problems.
Stephenson, Blake and Co. was founded in 1819. In 1937, the famous type foundry H. W. Caslon & Co. was acquired. Stephenson, Blake and Co. stopped founding of type in the late 1990s. Their materials were placed in the Type Museum in London.

Latin is part of the Linotype Library.
The Know How section offers detailed background knowledge to deal with all enquiries about the use of fonts.