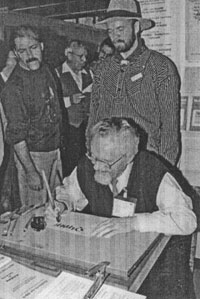 Professor Walter Stähle
Walter Stähle was born on July 9, 1919 in Rottweil, Germany and died on May 29, 2005 in Stuttgart. He completed an apprenticeship as a typesetter and then studied at the Master School of the German Trades in Offenbach am Main, which is now the University of Design. He acquired an Ernst-Engel press from his teacher Ernst Engel, which he took with him to Stuttgart. He began teaching there in 1953 at the College for Graphic Arts and was named Professor in 1973. His acquired press was moved to Meersburg am Bodensee in 1981 and then given to one of his students in 1997. The student brought the press to Alsace.
The Know How section offers detailed background knowledge to deal with all enquiries about the use of fonts.